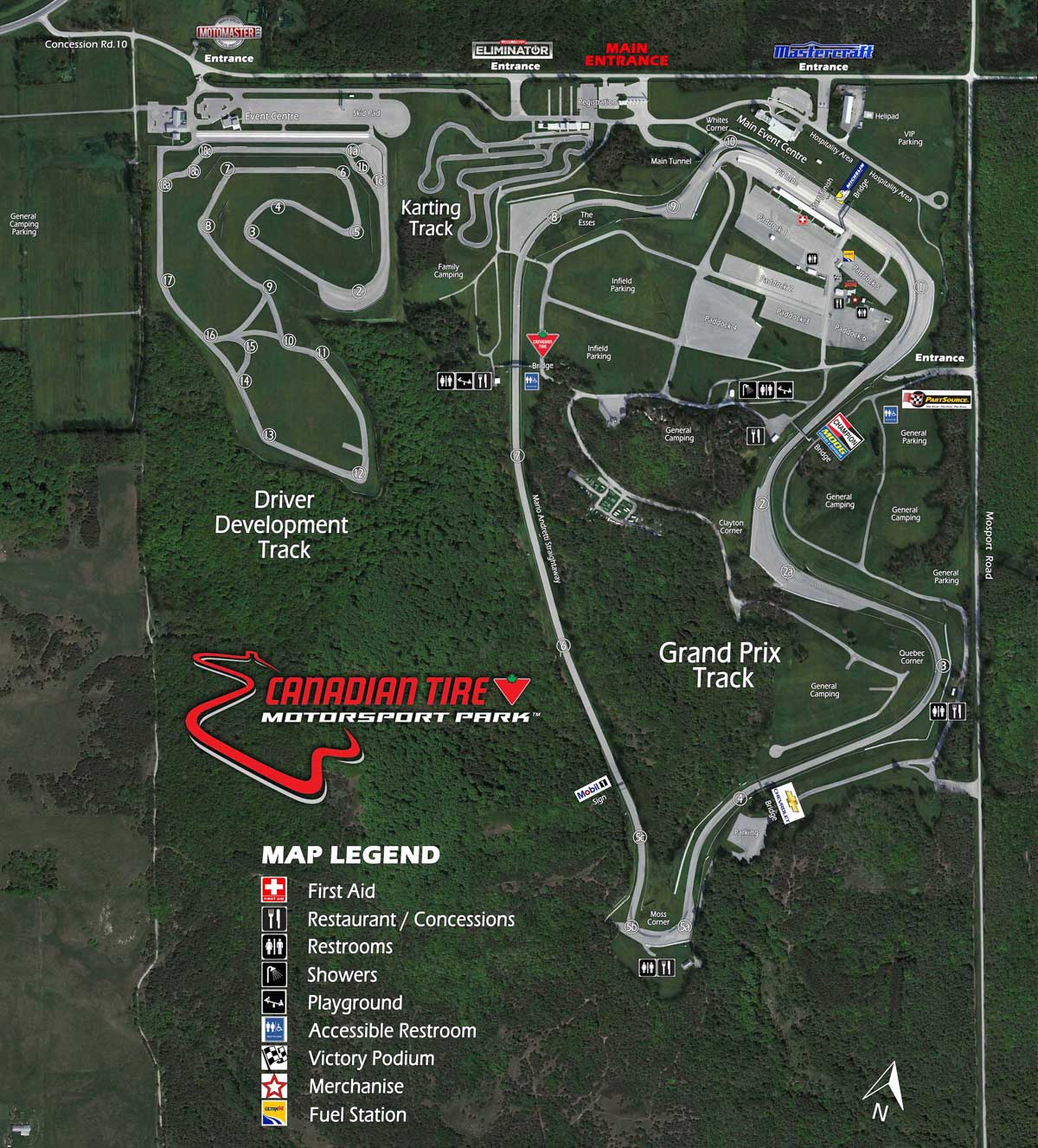 Canadian Tire Motorsport Park’s renowned 3.957 km (2.459 mi) Grand Prix track opened in 1961. Today it is CTMP’s centrepiece and primary spectator facility. This high-speed circuit comprises 10 turns and several dramatic elevation changes that confront drivers with an exciting variety of challenges on every lap. The track is used for racing by all types and classes of cars and motorcycles, from amateur to major-league professional. It also is used for supervised street-vehicle lapping sessions and driver training, and for testing and product demonstrations. The Grand Prix Event Centre offers convenient, practical and flexible spaces for a variety of event opportunities. Our multi-functional facility houses a large ballroom or conference hall, an intimate lounge, boardrooms, and an additional level that may be utilized in multiple configurations. Also available, an open air roof top offering a unique space and panoramic views.
– Courtesy canadiantiremotorsportpark.com
The circuit was the second purpose-built road race course in Canada after Westwood Motorsport Park in Coquitlam, British Columbia. The track was designed and built in the late 1950s with the first held in June 1961, followed shortly thereafter, on June 25, by its first major race, the Player’s 200.

The proposed hairpin was expanded into two discrete corners, to be of greater challenge to the drivers and more interesting for the spectators, at his suggestion, and is named Moss Corner in his honour. Unlike many historic motorsport venues, Mosport’s track layout has remained mostly unchanged from its original form.

For 2001, the entire circuit was repaved to meet FIA specifications, and is now 42 feet (12.8 m) wide. Drivers were consulted to ensure the character of the “old” track was kept; almost all the “racing lines” have been maintained.

Mosport achieved acclaim through a series of international sports car races under the title “Canadian Grand Prix” normally reserved for Formula 1 races. Many events were wildly popular, breaking Canadian sports attendance records with each successive race. The success of these races led Mosport to be seen as a key component in the founding of the Can Am Series.

Stirling Moss won the two-heat Player’s 200 event in a Lotus 19, followed by Joakim Bonnier and Olivier Gendebien in second and third places.

The CanAm first visited in 1966, and Mosport hosted at least one event in every year of the series’ history, except 1968. In 1967, Canada’s centennial year, Mosport hosted Formula One, USAC, and a 500cc Motorcycle Grand Prix. F1’s Grand Prix of Canada remained at the track until 1977, until it was moved to Montreal. Mosport has hosted a wide variety of series throughout its history.

The fastest ever recorded lap was taken by Rinaldo Capello, in an Audi R10 TDI, in qualifying for the 2008 Grand Prix of Mosport, with a time of 1:04.094. The race lap record was set in that weekend with Capello’s Audi Sport North America teammate Marco Werner lapping in a time of 1:05.823.

The CTMP Driver Development Track (DDT) is an 2.88-kilometre, advanced driver training facility. The track is designed with the flexibility to be configured in several different layouts to suit a variety of purposes. The facility also includes a massive 1000’ X 150’ skid pad complete with a large power circle. In addition, our trackside Event Centre, provides an ideal space for entertaining, media events and product demonstrations.
– Courtesy canadiantiremotorsportpark.com
In the spring of 2000, Mosport opened the Driver Development Centre, a second 1.7-kilometre (1.1 mi), 12 turn training circuit designed for driver development. The new course was designed by the owners and instructors of the Bridgestone Racing Academy and was designed specifically with fewer guard rails, walls and minimum blind corners to meet the needs of their driver and mechanic training program.

Due to significant scheduling demands on the original grand prix circuit, the original academy course was reconstructed and lengthened to a full racing course in the fall of 2013. The new track features two configuration options; a 2.2-kilometre (1.4 mi) intermediate course, a 2.9-kilometre (1.8 mi) advanced course, as well as a skid pad, a pit lane, and a multi-storey event centre with classrooms and other facilities.

The Mosport Karting Centre is a permanent, purpose built facility designed to accommodate a range of activities from fun events to serious, high-level kart racing on our 1.5 km track. The trackside viewing lounge and all weather hospitality tent make it an ideal venue for corporate groups to host motivational and team-building exercises.
– Courtesy canadiantiremotorsportpark.com